Award-winning visual artist, graphic designer and filmmaker Aquil Virani was selected for the Museum’s first virtual residency. Inspired by the Museum’s "Contributions" playing in the Canadian Immigration Hall, Aquil invited participants across Canada to digitally submit stories of the immigrant heroes in their lives. He weaved their heartfelt tributes into three different projects: an animated film integrating text, images, and voices of participant stories; a series of six painted portraits presented amid a backdrop of story submissions; and an anthology book of "100 immigrant stories" that includes an introduction written by the artist, an interview conducted by the Museum, and the word-for-word stories of everyday participants from across the country. 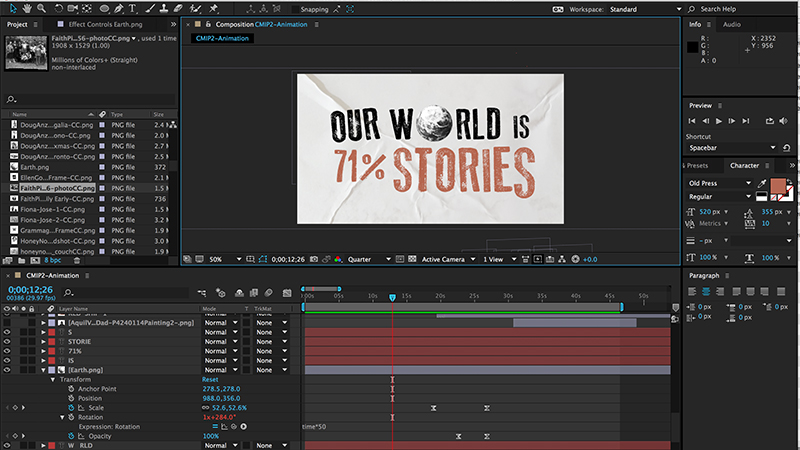 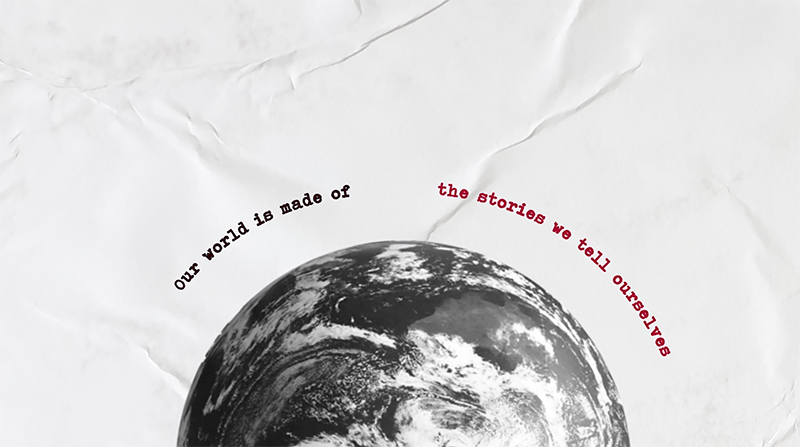 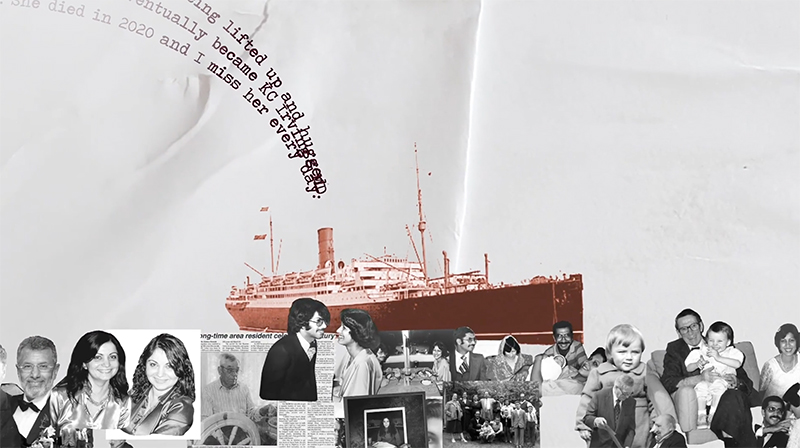 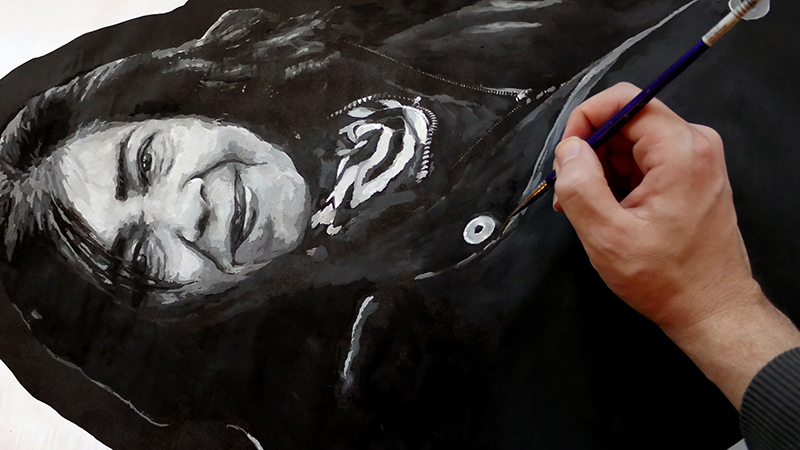 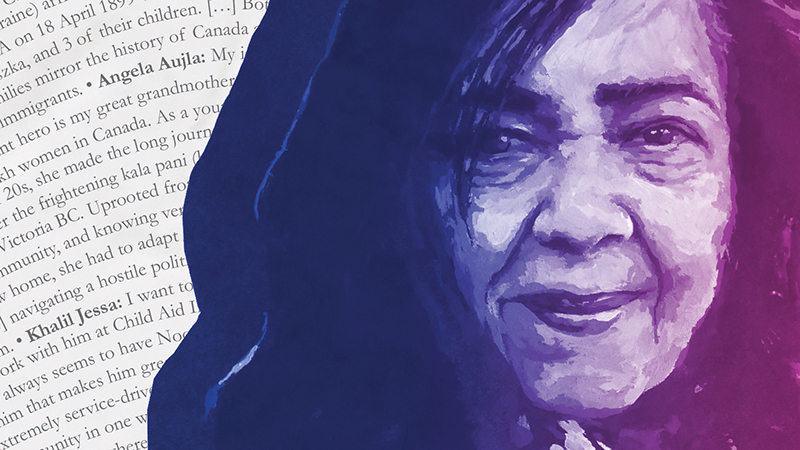 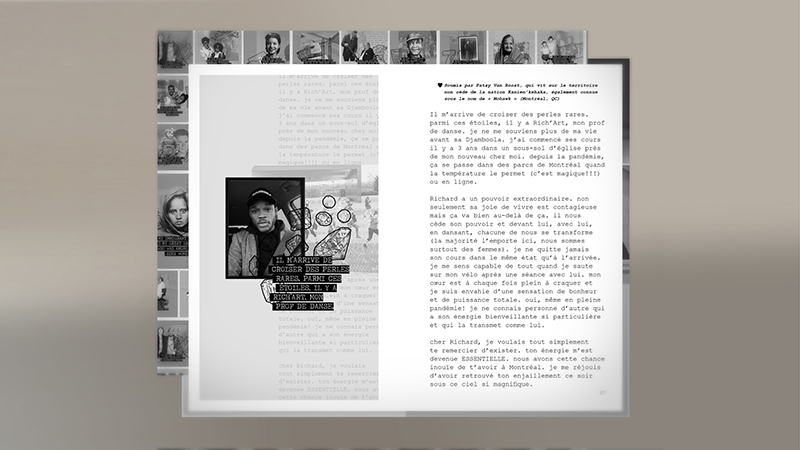 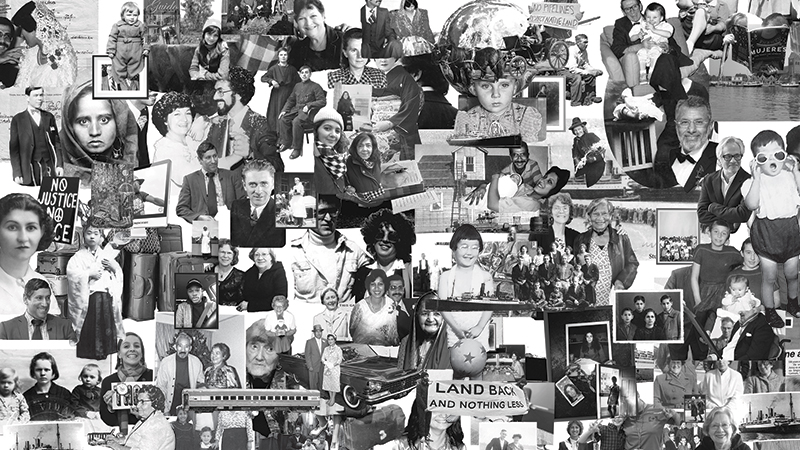 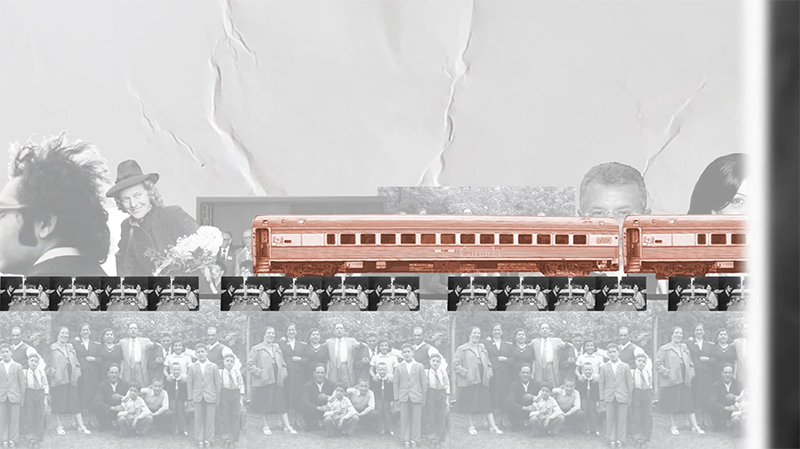 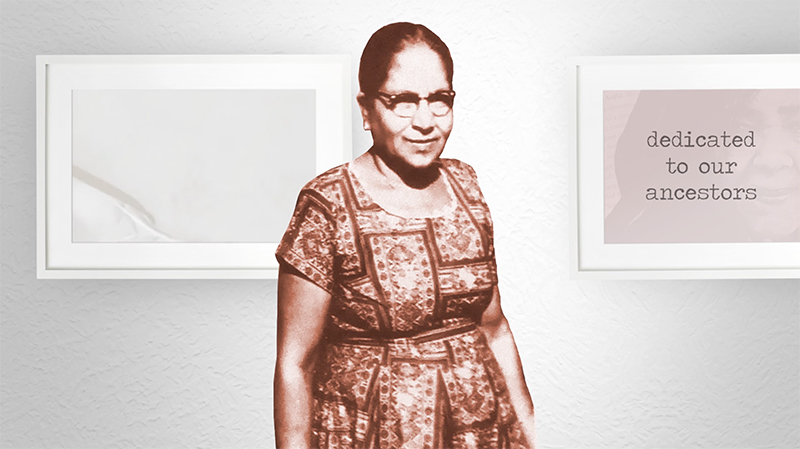 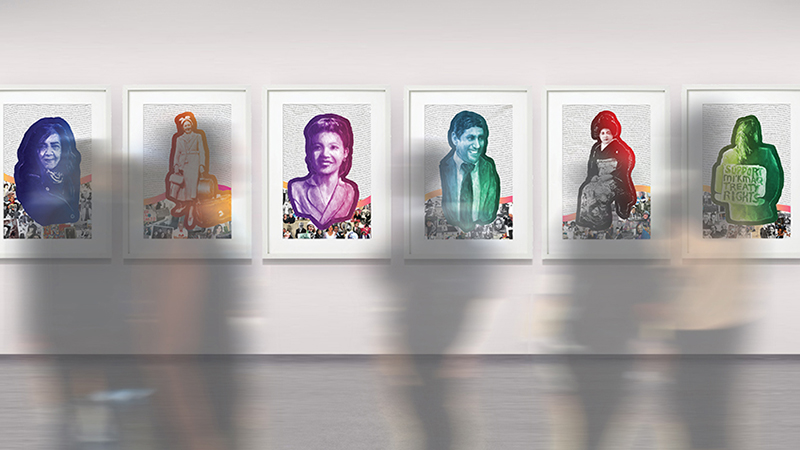 Carrie-Anne Smith describes the film as a "poignant and joyful love letter to immigrants." For artist Aquil Virani, the style of his film is "something like an animated collage of voices, text and photographs that celebrate our immigrant heroes." The creative work integrates the real details of stories from various communities as told by them. The use of voice is crucial for Virani. "Part of my work as an artist is not to "give a voice" to participants, but rather to amplify these voices that already exist. Hearing the real voices of participants enriches the work and ensures that we are hearing directly from them about their story." All of the text and photographs included in the animation were submitted to Virani as part of an open call for everyday immigrant heroes as part of Virani's artist residency at the Canadian Museum of Immigration at Pier 21. Learn more about Virani's work at aquil.ca.

Text on screen: An animated collage celebrating our immigrant stories

Text on screen: Our world is made of the stories we tell ourselves

My name is Alex Tran. I am a Montreal-based photographer.

Hi, my name is Mariam. I’m in grade 9 in Canterbury High School.

My name is Navin Virani and I’m a retired mom.

My name is Doug Anzai.

I arrived here― my great-grandfather, who also immigrated, kept calling Canada heaven. How could I not participate in this heaven that he talked to me about before he passed away?

Text on screen: My uncle was turned away from immigration in Canada and the ship eventually went to Newfoundland, who accepted him. Eventually, he came to Canada. As a Jewish man escaping Poland, he eventually became KC Irving’s MD.

Text on screen: My family immigrated in 1952 when I was 5 years old. To this day, I remember getting off the ship where my father was waiting for my mother, my sister and I. I remember being lifted up and hugged.

Text on screen: My Mum, Leila Ewing, came to Canada in 1963. Born in Jamaica, living there until she was 27, she left when she married my father. My Mum was smart, caring and fearless. She died in 2020 and I miss her every day.

(Translated from French:)
So, hi everyone! My name is Richard. My family name is Laubonet. I am of African origin, mainly Côte d’Ivoire. The most beautiful country in the world. [laughter]

Well, first of all, my name is Nouri Haidar Al Hassani. I’m originally from Iraq, actually, south of Iraq, right on the Gulf between Iraq, Kuwait and Iran, and that area.

She found herself on a boat at the age of 16, separated from her five siblings and parents. Everyone scrambling to flee a war-torn country. Thankfully, they were saved and learned from their rescuers how lucky they were. The rescuers were on a resource-limited ship and had encountered others needing help at sea. They knew they couldn’t help all of them. They decided to help the thirteenth boat they encountered. My mom was on the thirteenth boat.

I can remember asking my grandparents when the Canadian government was addressing the relocation of the Japanese community away from the coast.

It’s not hard to share the stories, but they may not be able to handle the answers I might give them.

My grandfather had kind eyes and an even temper, and was loved by many. He listened intently to everyone and liked spoiling his grandchildren.

I had to leave the country, actually, in 1991, if you guys remember what happened in that time against the regime of Iraq. I lost my oldest brother, Dr. Nadir, got executed and we don’t know where’s his body. Then my dad, in 1991, same thing. So, yeah, it was― it was a horrible time that I went through. But alhamdullilah, I’m okay right now, so, since I came to Canada, I was, you know, one the luckiest people, maybe. [laughter]

Text on screen (translated from French): Sometimes, I come across true gems across the stars, like Rich’Art, my dance teacher. I don’t remember life before his Djamboola. Dear Richard, I just wanted to thank you for existing.

Text on screen: My mom, Dilshad Punjani, is 74 years old and still working as a nurse at St. Paul’s hospital in Vancouver, BC. She immigrated to Canada to join her family who left Uganda fleeing Idi Amin’s regime.

Text on screen: I am an immigrant from my last, living, close relative. There is a gap in my heart, in my life, but so it is with all immigrants. We do not regain what we leave behind.

I think… I think I’m stalling in sharing these stories. But I also realize that if I just keep waiting and waiting, then these stories won’t get out.

He wouldn’t stop talking about Vancouver and how beautiful it was, and all his friends were there, and so the first date, all we talked about was Vancouver in Canada.

I think diversity is― you learn a lot, you know? You take your blinders off and open your mind up a little bit.

Do I feel like an immigrant? No. Not really. I don’t think about it every day. Once in a while, I guess I am being reminded, but not― not on a daily basis.

For my opinion, it’s a really hard time, because when we came in 1996 and I’s met, like, probably three or four families that I met in that time. The first challenge is the language. The second challenge is to find and to make friends. So, it’s very difficult, to be honest.

No matter why we came and no matter where we left, your heart is broken. That’s my theory! Maybe I’m wrong.

I am a lawyer. I used to practice immigration law in Toronto for several years. There’s a lot of uncertainty in immigration. Either as an applicant, a client, a refugee claimant. The process is both complicated and not transparent, so it can be hard to know where something is. It can be difficult to get a response from immigration, and it can be very lengthy and expensive.

Like, I always wanted my kids to be who they want to be. But nobody gave us a manual on how to raise kids in Canada. So we had a really tough time, because we were brought up so differently.

(Translated from French)
Right now, I’m happy with the path created, because it was like, the tool for me, the best tool of my life, to promote my culture, where I come from, you know, what I share. In my Djamboola class, there are Quebecois people, Asian people, European people, French people― everybody mixing together. There are like, all kinds of people, but they come to discover my culture, you know?

I moved when I was eleven and a half. So, I was young. Some people say, “Oh, but you, it’s different. You weren’t an adult,” but everything I am today and everything I do – like my work – is so related to those holes I have. Holes I have because I immigrated.

I am an immigrant myself, but I am very grateful to my friend Nicole, herself an immigrant from France, like me, who has during some forty plus years supported me emotionally during my hardest times.

You say it in Kutchi.

This is in Kutchi. Gujarati …

Then you say it in Swahili.

“There’s no problem.” Then, also, I know a little bit of French. Comment allez-vous? [laughter]

Text on screen: I consider Canada ‘Heaven’ as my grandpa called it when he visited here! Alnoor said when he was young, he would draw mountains and oceans and birds. That is how Vancouver is ― like a painting!

I still want to hold on to that Japanese side and share that with my children, and allow them to have a few fibers of their roots in that fraction, their Japanese side. Because my children are hapa ― what we call hapa ― hapa hapa, half-half. They’re half-Japanese from my side, and they’re half British-Canadian from my wife’s side.

Text on screen: My Mum came to Canada in 1963 along with the rest of the family. My Mum was smart, caring and fearless. She took on life with a smile and her contagious laugh. She died in 2020 and I miss her every day.

(Translated from French)
That’s the beauty of it, immigration. It’s being able to take your way of life, of your life prior, to your new life here, and find the equilibrium, and work well with both. But obstacles― you do encounter them here, and others might not necessarily understand that. That’s for sure.

I think, as a kid, I wasn’t thinking about it too much. It’s something that developed as I got older. But there is, of course, this shame, or this guilt, that you feel for ― for benefitting from all their hardships.

Now it’s time for me to give back, for the community and for the people, who helped us and helped me, and helped my family. We are human, right? And we should help each other, regardless of our background, race, religion, or whatever.

I think that immigration stories go beyond the arrival into the new country. There’s something interesting that happens afterwards, and, to me, the sort of― what happens to the next generation is interesting.

Text on screen: dedicated to our ancestors

All our stories are different, and all are legitimate. No matter where you came from and no matter why you had to come.

Text on screen: the end