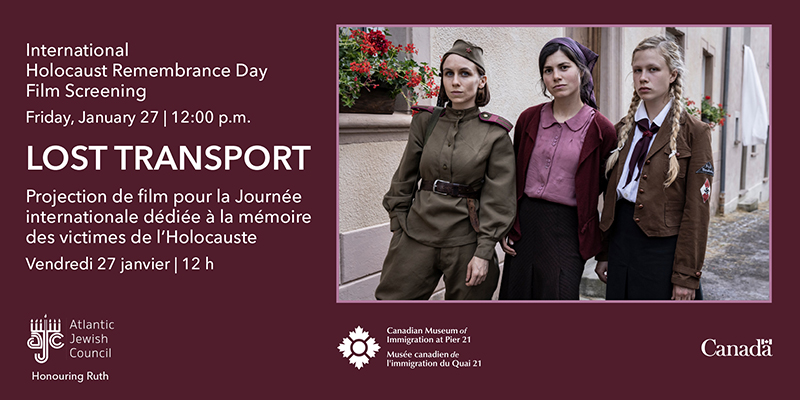 Date: Friday, January 27, 2023
Time: 12:00 p.m.
Location: In-person event at the Museum
Language: Presented in English
Cost: FREE (does not include admission to exhibitions)

In honour of International Holocaust Remembrance Day and in partnership with the Atlantic Jewish Council, we are proud to present a film screening of Lost Transport.

In the Spring of 1945 a German train deporting hundreds of Jewish prisoners from Bergen-Belsen is abandoned near a small German village occupied by the Red Army. The village quickly turns into a chaotic refugee camp, and the Soviets impose a quarantine to contain the typhus epidemic that has broken out on the train. No one is allowed to leave the village. But in this context of deep mistrust, desperation and revenge, an unexpected friendship emerges between the fearless Russian soldier Vera, the distrustful German village girl Winnie and the courageous Dutch Jew Simone, three women who could not be any more different from one another.

Lost Transport provides a poignant example of how human beings can overcome the role of enemies that a war not of their own making has thrust upon them.